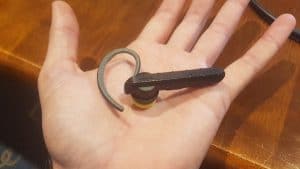 How to update firmware to version 1.20.
So I’ve had this bluetooth headset for years. But never really used it because of the complaints from people on the other end of the phone call saying things like:

As you can imagine nobody wants to suffer from this during a phone call. So I decided not to use it and found the corded headphones were a lot better, albeit annoying with the cord that regularly got pulled out of my ears because of work.
Anyway the point of this post is that Jabra have released version 1.20 firmware for this device and I was hoping that it would fix these issues. Unfortunately after eventually finding the correct firmware to download and use it wouldn’t work. The program would run, it would “see” the Jabra Steel running on version 1.16 and it would put it into what they call DFU mode, but that is it. Nothing else happened.
Investigating the drivers for this DFU mode presented me with the the error that the drivers had not been “Digitally Signed”. So I presumed that the issue was a bad driver and powered up Chrome and began scouring the Internet for Jabra Steel DFU drivers. Well that resulted in a lot of results and most are related to these paid programs doing the work for you.
So I tried it on a different computer, upgraded to Windows 10. Tried again. Still no joy.
I decided to call Jabra Support and after the phone call settled itself (some of these VoIP connections are woeful) I told him about my dilemma and his answer was “You need to plug the device into the wall USB charging outlet for 20 mins”. Haha. I told him that is not the fix. He didn’t believe me. I asked for a support ticket and figured I would try something else.
Turns out in Windows 10 you CAN turn OFF the requirement of Digital Signing to drivers. To do this (obviously at your own risk) follow these steps:

When it reboots you will have driver signing disabled and you can proceed to install the latest version of the firmware.
So all in all, if Jabra would have delivered the correct signed drivers this would not be a problem and it would have saved around 4 hours of mucking around. Thanks guys. I’m still not convinced that my Jabra Steel will be usable even with the updated firmware but hey maybe. Lets hope right 🙂
Official website link here

Posted in:
Tagged with:

All hosting plans are subject to change and TechCare's PDS. Please contact TechCare for any further details